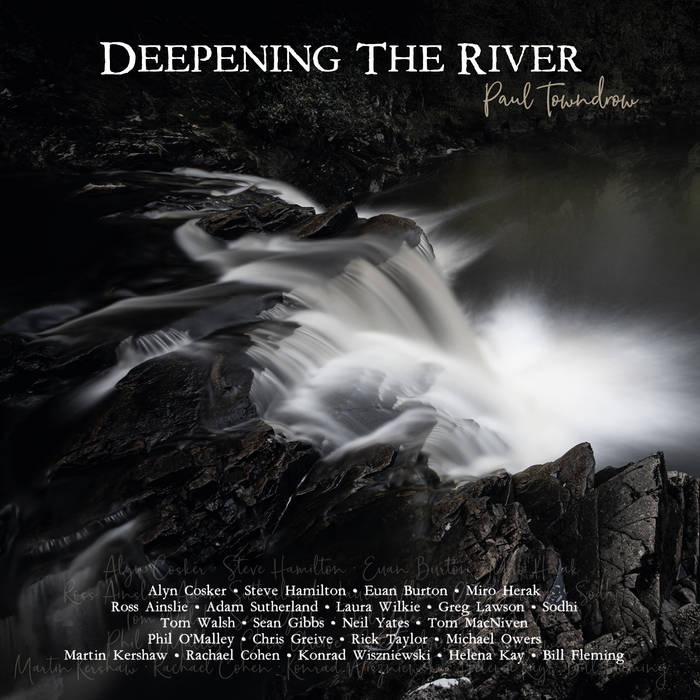 This music is intended to be heard as a single extended work.
These individual listed tracks comprise a continuous suite of music.

This is the culmination of a journey that began in 2018 as a specially commissioned work for the City of Glasgow. It received its premiere at The Merchants House of Glasgow, during Festival 2018 (the arts programme accompanying a major international sports event), followed by a repeat performance at the world-famous Celtic Connections festival in 2019. The project was finally completed in 2020 during the global COVID-19 pandemic, culminating in this recording.

I have often struggled with the notion of assigning any single objective meaning to a work of music. It’s hard to do, and it makes writing about it a tricky, often futile pursuit. As a listener I have found myself beholding pieces of music as beautiful, universally resonant statements, encapsulating human consciousness and shared experience, while at other times, it’s just functional stuff for dancing to, driving to, eating to – no reflection on ‘meaning’ required, just there to be consumed in the moment and enjoyed for what it is. So, accepting the disclaimer that these notes may well be such an exercise in futility, and that music will always be reliant upon, and subject to, the individual upon whose ears it lands – I will endeavour.

‘Deepening The River’ is in the first instance about Glasgow, its citizens, its diverse communities, its complex history, its collective consciousness, and its international reputation throughout history. The music is intended to invite an exploration of a multitude of themes based around Glasgow’s people, history, and culture, specifically the role in the 17th Century of The Merchants House of Glasgow in campaigning for the deepening of The Clyde to enable the passage of ships, and to facilitate trade. It should be noted that The Merchants House is now a major charitable institution and donations of more than £700,000 are awarded each year to deserving charities and individuals in Glasgow and beyond.

My idea was that “Deepening The River” could become a powerful musical analogy, bringing together themes of hope, recovery, potential, social, cultural and industrial history, movement of people, exchange of ideas, combined with a deepening of thought, tolerance and understanding. I also wanted to bring together musicians from both Glasgow and elsewhere in Europe, to represent a collaboration of diverse musical backgrounds and to explore musical influence from India, America, and Scotland. I drew upon the influence of three rivers (The Clyde, The Mississippi, and The Ganges) as an initial thematic focal point. The Sierra Leone River estuary is also historically important here. You may hear some pretty obvious symbolism in the music, particularly in the opening section as a ‘bell’ (unheard for hundreds of years) tolls, as if to herald in a new beginning. A ship slowly winds its way down a river, into open waters and out into a wider world. It’s cargo and mission are perhaps questionable, but in any case, it brings about seismic changes on a global stage.

It is true that the deepening of the River Clyde was a vital step in pushing Glasgow to the fore as an international trading power and establishing it as the ‘Second City of The Empire’, and indeed in its significant part in the Atlantic Slave Trade. This is an area of history that is familiar to most musicians, especially within the jazz tradition, which easily traces so much of its roots to the enforced movement of enslaved Africans to America. Jazz is perfect imperfection; a messily syncretic form with its roots in early spiritual music, work songs, gospel music, and the blues. It represents so much of the undeniable, inherent resilience of the human spirit. Music has always survived hardship - even the most abhorrent examples of human oppression, slavery, and social marginalisation. Music, I believe, has always been the purest, most clear expression of the web-tangle of the human condition, leaving an echo of social commentary throughout its past that can cut to the quick, often times more directly (and accurately) than the history books.

Glasgow’s historically ignominious role in Britain’s colonial past can clearly no longer be denied or swept under the carpet. And we must of course, continue to educate ourselves and insist upon proper and full recognition of events of the past, as how else can we learn, and move forward. I will be no more literal and explicit other than to point your attention to some glaring clues in the titles of some of the tunes on this album (I accept that I am just a guy with a saxophone and that others tell this story much better than I can!) You may take them as a prompt for research if you choose, and to explore those articulate contemporary voices who now speak with such clarity and poignancy on these issues.

That brings us to the next key theme of this music. What can ‘Deepening The River’ mean to us in the context of the (not insignificant) struggles now facing humanity?

Perhaps it can represent a deepening of thought, tolerance, and understanding. It can represent a shift in collective ethos – as the river opens out to the sea, we have the potential to be true world leaders, exporting our creative ideas, culture, industry, and outlook to the rest of the world. ‘Deepening The River’ means encouraging the enrichment of a society that opens its doors to people in times of need rather than victimising those who find themselves marginalised, displaced, enslaved, or misunderstood. ‘Deepening The River’ shouldn’t be for greed, but instead for love, for nurture, to eschew fear and oppression, and allow people to feel safe in their own gender, sexuality, race, or age. In recent centuries the human race has advanced with respect to global dominance, to the extent that it has relied upon the physical alteration of the fabric of its earthly environment in search of riches. But at some point, our species must begin to repay its debts, through respect for and its environment, and its co-habitants.

‘Deepening The River’ means that we look to history and learn lessons, and that we examine the world around us with the type of scrutiny that differentiates the truth from the ‘alternative truth’, but without breeding suspicion and prejudice towards our neighbours. ‘Deepening The River’ of a city educates, inspires, entertains, and sees the value in art and heritage, in preserving its great buildings, in encouraging the health and wellbeing of its children, and showing care and respect for its older citizens - no one human life more valuable than another. ‘Deepening The River’ means digging deep for hope, confidence, and positivity, even when the world around seems to be moving in the other direction. Hope in the face of adversity; that’s the message of the blues, jazz music, the message of folk music around the world, and I hope, the message we can successfully convey with this musical offering.

‘Deepening The River’ means always returning to what ought to be important to us as human beings. With this music, my aim was to make the listener feel like they were hearing and feeling something they’d heard before. A sort of implied nostalgia, or ‘induced déjà vu’, if you will.

Music in itself rarely needs to ‘educate’, rather it should remind us of what we knew all along. It’s a prompt to ‘remember’.

Music listeners often talk about hairs on the back of their neck, involuntary foot tapping, dancing, or even being moved to tears.

That’s us remembering what it is to be human.

To Tom and Grace Baxter for your generosity, enthusiasm and support, and for enabling this project. Your kindness will never be forgotten.

To Michael Connarty for your kind contribution towards getting this project over the line.

For their invaluable roles in delivering this music to a live audience:
Katie Duffy and the team at Festival 2018, Ian Dickson and our friends at The Merchants House of Glasgow, Donald Shaw and all at Celtic Connections, Mark McKellen and Keir Long for the great live sound, Heather MacIntosh for sanity saving stage management.

To Stuart Hamilton for his skills, ears, and welcoming us into his truly world class recording studio.

To Ross Hamilton for his incredible knowledge, skill and patience, as well as his great chat, and a quarter of a century of friendship.

Thank you to my inspirational Mum & Dad, without whose nurture and support, this music could never have existed.

Thank you to Meg for your love, support, and patience throughout this journey and beyond - and for leading me by example, to become a more creative, focussed, and happy human being.

To each of the musicians who went above and beyond to bring this music to life, and for giving me such a humbling learning experience. It is such an honour to make music with you.

In memory of Chloe, beautiful daughter
of Tom & Grace Baxter.
She loved life, laughter and music.

For over 20 years, Scottish Saxophonist Paul Towndrow has received high acclaim for his live and recorded work with small groups ranging from duo to sextet, and for his compositional works for big band, full orchestra, and more.

Bandcamp Daily  your guide to the world of Bandcamp